The Storm is Revealing

This quote was shared by Women Who Change the World on Facebook.  The idea that there are two tests reminded me of an oracle card I pulled recently that illustrated two outcomes of a storm: to trap or to nourish.  The storm clouds, whether they trap or nourish, “transform events and outcomes” according to Donni Hakanson.

In the story of the Gymea Lily, a fierce summer rainstorm caused a tribe in the mountains of Australia to take cover.  The rains were so great they created a landslide that trapped the people.  One warrior sought and found a way out, only then to realize he couldn’t free his people because large boulders were wedged into the mouth of the cave they had taken shelter in.  That warrior kept his people alive while continuing to work to free them.  One day, exhausted, he slipped and fell to his death.  As he died, full of anguish for not being able to care for his tribe, he clutched a small plant with white flowers.  Those flowers turned red with his blood, and the plant grew, strengthened by his spirit.  The rains that had trapped the warrior’s people later nourished the flower he clutched. 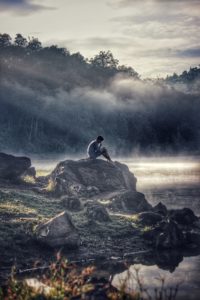 Photo by dave jack from Pexels

The storm revealed the character of the warrior just as whatever happens in our lives can reveal our character.  For example, when nothing happens it can reveal impatience or doubt, while everything happening at once can reveal a lack of focus or ability to cope and multi-task.  In this case, the storm is what’s happening and that happening is either all or nothing.

Tiffany is an ICF Career Coach and a cross-pollinator of ideas with a background in broadcast journalism, social and ecopsychology, and coaching. Tiffany’s nearly two decades of experience has helped her to identify the power of story in connecting us to each other as well as to our environment. A believer in the power of reflection, practical application, and celebrating victories, Tiffany understands that the more we all live our dream, the more we can model it for future generations.
View all posts by Tiffany A. Dedeaux →
This entry was posted in Awareness, Change, Decisions, Ecopsychology, Grief, Life, Narrative Ecopsychology, Reflection, Stuck. Bookmark the permalink.