Making a Year to Remember

Now that I’ve outlined suggestions on how to plan your goal achievement for the year, I thought I’d share with you how my process went for last year.

Instead of going according to the four seasons of Winter, Spring, Summer, and Fall or the stages of transformation of the butterfly as Egg, Larva, Cocoon, Birth, I discovered the seasons of the ancient Egyptian calendar of Inundation, Emergence, and Harvest.  This meant that each season, for me, involved four months, but the real treasure was how this metaphor had me considering the season I was in.

Through research I laid out the seasons according to how I knew my energy would flow, but also because I establish my resolutions around my birthday, when I reflect most on my life.  I understood the season of Inundation to be a time when the Nile would flood the farmland forcing farmers to do different work.  This has felt relevant to me because during the Winter months my energy and activities slow but during the Summer there is much going on.  This time of Inundation doesn’t make sense by itself because I’m having to find other ways to spend my time.  In context I can see this as a necessary time because when the waters recede in the season of Emergence, the soil will be fertile for the seeds that I plant just as I am exploring new ways of understanding development.  Plant I must, because without a planting time there can be no season of Harvest and without new ideas I’m just sharing the same old content.  During the Harvest I can gather what I’ve done that has matured so this year will prove to be an extension of what happened last year.

For me this was a beautiful way to look at the cycle of the year and to know that there would be a time when I would write.  In fact last year is when I published Ethics and the Earth Missionary.  It was a few months later than I had wanted to publish, but because of the flow of the year I knew that I could take until the end of April to accomplish this goal.

Because I am a workhorse who takes on a lot of heavy labor and can produce a great deal, I have to remind myself to rest.  This is also why I have so few actual goals in my 2013 list.  The trick for me is not to do more but to do the right things.  By the end of the year I had in my goals to go to Belize, to be in Bellingham fulltime, and to have a new house.  Another way to look at these goals was to realize that the final season was to be a time of rest so the first part of the year is where the majority of the work had to be done.

Creating (and Adjusting) My Plan

While I wasn’t as specific as I should have been in marking the different milestones of the year, I can tell you how things worked out.  As I mentioned previously, I was in tune to the idea not to release the butterfly before its time which is a mixed metaphor but is also a way to say that I cannot go back to the work of farming until the waters had properly receded and the soil was ready. 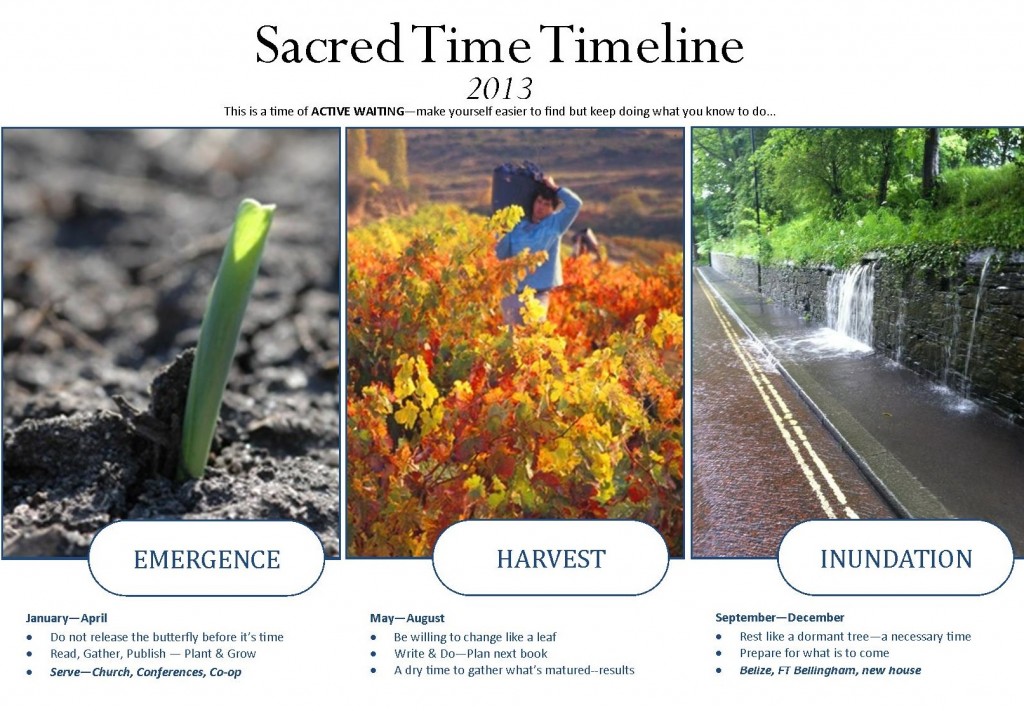 The first part of the year was a lot of work to edit Ethics and the Earth Missionary and to reach my deadline of publishing it during that time of the year.  I did not plan out my next book in the second part of the year as I thought I would, but I have several ideas that have come up, grown, and deepened as a result of focusing on and exploring ideas in my Narrative Ecopsychology blog.  As for Belize, Bellingham, and a new house my accomplishment was on time, ahead of time, and delayed for another time.  My husband and I went to Belize as planned, and all other commitments worked around that.  I moved myself to Bellingham in March and all of my work in June.  The new house was scheduled for November but, truthfully, other things became more important so the priorities shifted to what made better sense a busy and challenging year.

It was the shift in perspective to a new kind of calendar that helped me to realize how important it was to rest and spend different parts of the year on different projects.  It was also the focus on having a harvest season that helped me to realize I had to do the work and plant the seeds in order to have something to harvest.  What I also found was that what I wanted to spend my time on wasn’t necessarily in line with the goals I listed, or my priorities had changed.  The difference between simply procrastinating and avoiding doing the work is the conscious decision to let go of one goal to pursue another.   Sometimes resources, like our time and attention, are limited.  Other things I accomplished so early on in the year that there was more time to focus on making things work which is the maintenance/termination stage I talked about at the end of the last post.

What I’m planning for this year is to stay with the Egyptian seasons and be more specific with my milestones so that each season builds on the next.  As I’ve already asked you what goal would make your year satisfying, let me now ask what is your plan to achieve that goal?

Tiffany is an ICF Career Coach and a cross-pollinator of ideas with a background in broadcast journalism, social and ecopsychology, and coaching. Tiffany’s nearly two decades of experience has helped her to identify the power of story in connecting us to each other as well as to our environment. A believer in the power of reflection, practical application, and celebrating victories, Tiffany understands that the more we all live our dream, the more we can model it for future generations.
View all posts by Tiffany A. Dedeaux →
This entry was posted in Awareness, Career, Change, Creative Metaphor, Ecopsychology, Life, Narrative Ecopsychology, Reflection and tagged achievement, Coaching, Ecopsychology, goals, Narrative Ecopsychology. Bookmark the permalink.